Me: Have ya seen IT?

Them: WHAT IS IT?

Hehe couldn’t ya just go on for days!?  I want to preface this review with a couple of things. One, I’ve never read the War and Peace size novel. I passed by it at the store and couldn’t believe a book about demon clowns would require so much copy, but fuck me, right?  Second, I’ve only seen parts of the original miniseries with Nigel Thornberry.

What time is it!? EXPOSITION TIME! I can’t heeear yooou!

Horror movies HAVE to slice out a five minute block to explain why this stupid shit is happening. Ultimately what is established, whether or not an event occurred out of calculated choice or shear accident, is that the terrifying force is an asshole. Hell, even Casper the Friendly Ghost still had asshole ghosts floating around in the form Larry, Curly, and M-I mean…whatever their names were.

IT has a version of this, but it doesn’t establish a cause. There’s no spoken reason as to where this monster came from, why it lives in a sewer and why it can’t screw off to some other town where kids can afford to go missing (like Bangor, maybe). It only establishes that IT has a veeeery sensible dieting habit of feeding off of fear of a couple dozen people for 27 years.  I guess fear is extremely carb loaded.

Leave your 2017 baggage at the door

This movie, like Stranger Things takes us back to a simpler time when there was a Bush in office Batman was on the big screen and…wait, dammit!  It’s the 80’s baby!!  You gotta fill that package with references and period clothing and the music, yes god the music!  It didn’t bring the safe space, child protection fetish of today’s society.  My favorite part of the movie is the Loser’s Club defending their new found diversity check mark, Mike, through engaging in a war with the bullies by THROWING FUCKING ROCKS AT EACH OTHER!

Another aspect of this is innocence, or gullibility take your pick.  Now, my understanding is that the book was originally published in 1986.  It was written starting in 1981.  The childhood portion of the story took place in the 50s and after the 27 year lull, it picks back up in “present day” which was,  at the time, the 80s.  With that being said, the bit with the paper ship going down the drain was originally in the 50s, even though it was still used as a plot device in the 1980s setting when kids had arcade games and filtered cigarettes and shit.  While I’m sure there was much joy to be had in following a wax coated paper boat careen down a storm drain in 1958 (the excitement of the stick and hoop combo had seen its last days), we have to believe there was some validity to it in ’88…I mean, this is Maine so it might as well had been 1958.  You won’t even see kids today outside, let alone talking to strange clowns in sewers. 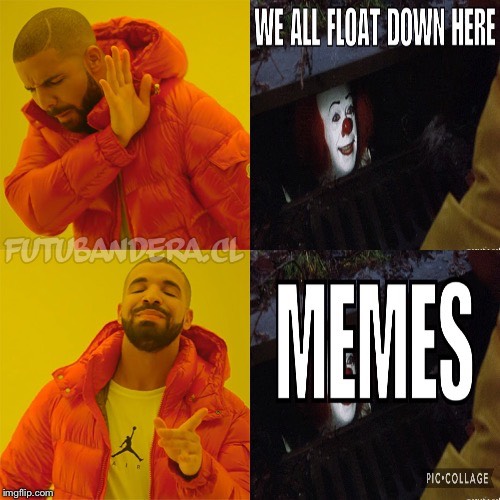 The adage of “don’t talk to strangers” barely even has relevance today, as kids spend time online telling strangers how racist they are or reading about flat earth theories.

First I think of a man, then I take away reason and common sense

Horror movies are suspenseful. They take long, ominous shots and couple them with slow and ominous music to produce a creeping sensation of fear. This process usually begins by giving you a test scare, where suspense builds and then turns out to be something innocuous. After that, the lid is blown off and the entire film is made of these moments, but with different payoffs like creepy paintings or a sink spewing blood (menstruation metaphor, anyone?).  However, these types of cinematic moves are only accomplished by one thing: the character has to be stupid enough to walk into it, AND BOY DOES THIS HAVE THAT SHIT!  Scene after scene of a strange noise or a glimpse of a child running away, or ya know…your sink talking to you, just wash/rinse/repeat made for a bit of an exhausting endeavor.  Every time some kid stepped toward something YOU KNOW they should run from, I just thought back to Bugs Bunny slapping a portly Elmer Fudd, “Don’t go down there!  It’s dark!”

The sad thing is, while you expect this behavior from oh-so-innocent 80s kids, they’re the smartest people in the movie.  When Stephen King writes children, he imbues them with intelligence, acute emotional sensitivity,  and bravery.  He also juxtaposes that with making adults incredibly two dimensional, caricature-like in their deviance or harshness.  Adults play little factor in the actual goings on of their town and rather spend their days psychologically damaging their children.  Some of these include character subplots that beg the question, “is that really necessary?” as it forces us to kind of confront an issue that isn’t really plot related, but does show us that there is a very real kind of evil in every day life that has nothing to do with fear carb eating monsters.

It’s a fun movie, bro.  I can’t deny the slight tingle of fear in some of those scenes as I have never really enjoyed clowns.  There were some violent parts but didn’t gross you out with over the top gore like in a Hostel flick.  The kids that were your protagonists all had their own voice, and when you get an ensemble that has to pull a movie, it’s nice to have a difference of character and not just kill fodder.  If you love horror, go see it.  If you’re not into the genre, see it for the rock war.