What a weird week in the NFL.

AND NOT BECAUSE OF THAT!

The Bears beat the Steelers!

Green Bay has to beat Cincy in OT!

It all came down to Monday night and the match up between America’s Team? The Dallas Cowboys and that rag tag bunch that used to have David Johnson, The Arizona Cardinals.

Compelling game? Maybe not at first with both teams coming off fairly lackluster week 2 performances, but what it did have were two fellas that we could not conceive getting passed over as first ballot Hall of Famers: Jason Witten and Larry Fitzgerald.

The two are very similar. Drafted just a year apart, they both lead their franchise in almost all significant receiving marks. They are both known for their philanthropy. They’re both two of the most respected players in the league. Fans nationwide would like to see either,  or both,  win a ring before they hang em up and both are rumored to be calling this year their last. 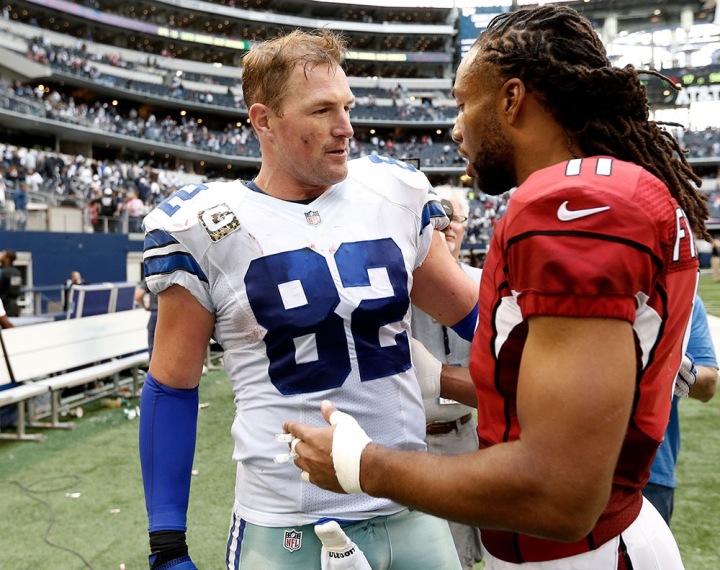 WELL NOBODY TOLD THAT TO LARRY FUCKIN’ FITZGERLAD

After coming off his last “last year, maybe,” leading THE LEAGUE in receptions, The Japanese Fighting Fish turned back the clock in this prime time match up to show vintage Fitz.

His greatest hits: run after the catch, 50/50 balls, route running, corner end zone grabs, physicality and concentration when he absolutely robbed Orlando Scandrick of an INT.

He makes a catch like that then helps the DB up. That’s Larry Fitzgerald. #DALvsARZpic.twitter.com/oeGqOfxece

The man was transcendent in his play, as he is often to do in prime time games. All Larry has ever done was everything his team asked, and the question is still begging:

What are they doing for Larry?

I’ll say this right now and Larry would agree (cuz he’s like that) that one guy doesn’t get you a Super Bowl. The problem with Arizona in these last few years has been consistency. They hang tough or blow guys out and win big games, then get strung out and lose bad ones. That doesn’t get you to the dance. With the injury to David Johnson, a back believed to be the Next Big Thing and a player the franchise was looking to lean on this season, the responsibility has been thrown back on the Cardinals’ receiving corps and the consistency of Larry Fitzgerald. As he always has done, Larry answers the call.

I love this guy. If I was building an all-time team, no lie, Larry is the first receiver I pick. He does everything. Hell, you could do a top 10 of his blocks!  The dude lays wood!  And here for the last 3-4 seasons we see the talking heads gab on about some new shiny receiver that comes to take the number one spot from the legend…and at the end of the year, there’s Larry, with most receptions and yards on the team. The man in competitive, humble, dedicated, professional, and timeless. It’ll be a sad day when he walks away. He’s irreplaceable, as a player, and ambassador of the league in sportsmanship and humanitarianism.

It’s only coming into week 4…let’s see what else the 14 year vet can still do.